Thus it is desirable to print a white primer only where some print content is printed afterwards. In addition, the degree to which the ink amount of the print content increases, less – if any at all – white primer might be needed.  As in most printing architectures, a white primer is relatively expensive, it would be nice to be able to limit the amount of white primer used as much as possible. Page areas printed with 200% of ink or more  do not tend to gain anything anymore from printing white below them beforehand (of course this will depend a lot on the  opacity of the inks used). 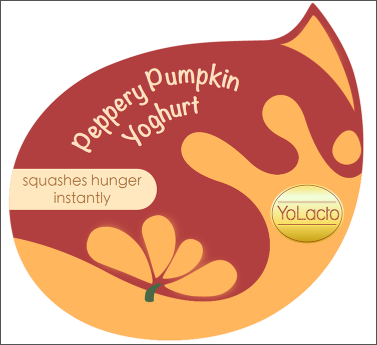 The sample label used in this tutorial is meant for printing on transparent foil, to be used as a glued on lid for yoghurt cups. The goal is to only print a white underlay in areas, where actual print content is present, and to only print as much of the white primer as actually needed – more on light areas of the print content, less in darker areas with a higher ink amount. To keep this tutorial simple we are ignoring different opacities of different inks.

The brownish red areas and the small green part have an ink coverage of just above 200%, whereas the orange areas sit at just above 100%. The remainder of the lid lingers mostly between 25% and 50%. Our assumption is that once ink coverage rreaches 200%, no white underlay is needed. Very light areas up to around 50% should be printed on 100% white primer, the range from 50% to 200% should go from 100% to 0% primer.

Create a new fixup, by choosing "Create spot color plate based on ink amount" as the fixup type (entering 'plate' in the search field will make locating it very easy), giving it a suitable name, and going through the configuration options, setting them to the values as illustrated below: 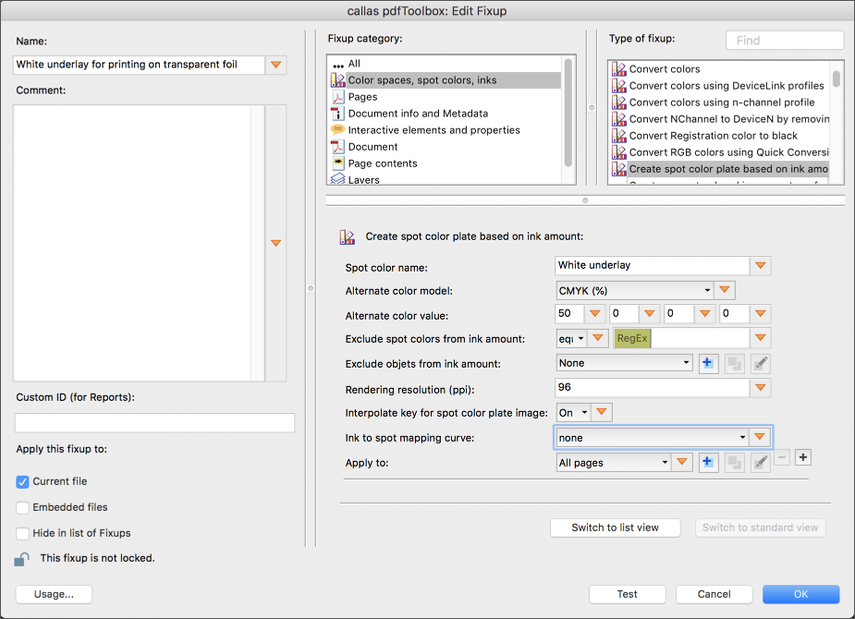 To make the spot color plate's content as smooth as possible, it is recommended to set the "Interpolate key for spot plate image" to "On".

Setting up the ink amount to spot mapping curve

In order for this fixup to be able to do its work, a mapping curve is necessary that looks at the ink amount values across the page (at the configured resolution – this example uses 96 ppi; for crisper results value up to 300ppi may make sense) and uses them to look up the tint value to use for the spot color plate.

Click on the "Ink to spot mapping curve" drop down list and choose "Open folder with configuration files" entry:

This will take you to a folder with already existing "Ink to spot mapping curve" files. The easiest way to creating your own is to duplicate an existing one (make sure to give a meaningful file name) and open the duplicate it in a text editor.

In the example shown below the following has been done:

Instead of closing the fixup edit dialog and running the fixup on the example file – or any other file – it is recommended t use the "Test" mode as then you can stay in the fixup editing context and are in a position to easily adjust the configuration without having to close and reopen the dialog and saving out modified files to your hard disk again and again.

The result is displayed to the left – here the new spot color plate shows up in light Cyan colored overlay. 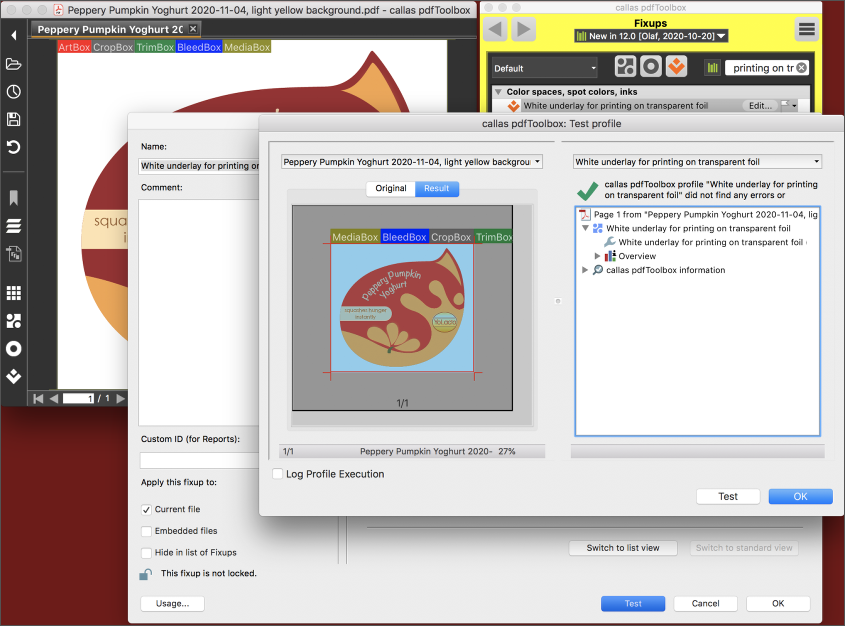 To be able to control the newly created spot color plate on its own, execute the fixup on the example file – or any other file – and inspect the result in the "Individual separations" view: 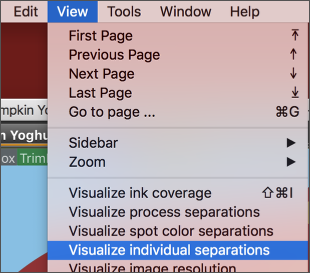 The "White underlay" spot color appears as a somehow inverted page image, with the darkest parts in areas where the page content is relatively light, and vice versa.

The approach explained in Part 1 runs into problems, if

As a further refinement, the shape generation can be configured such that the"White underlay" bleeds into the transparent areas by a few millimeters to compensate for registration issues or to make the print content stand out more on the transparent foil.

As this additional shape generation fixup needs to be applied right after creating the spot color plate for the "White underlay", it is best not use it on its own but instead to create a simple Process Plan that applies both fixups one after the other. The Process Plan is attached below.

Also, a slightly different version of the "Peppery Pumpkin Yoghurt" label is attached below – it has white background in some parts of the print content, while the page is transparent outside of the intended print content. 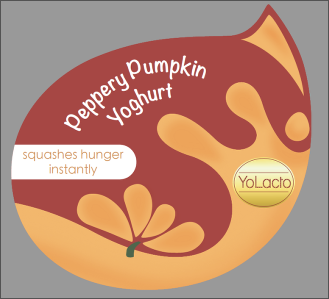 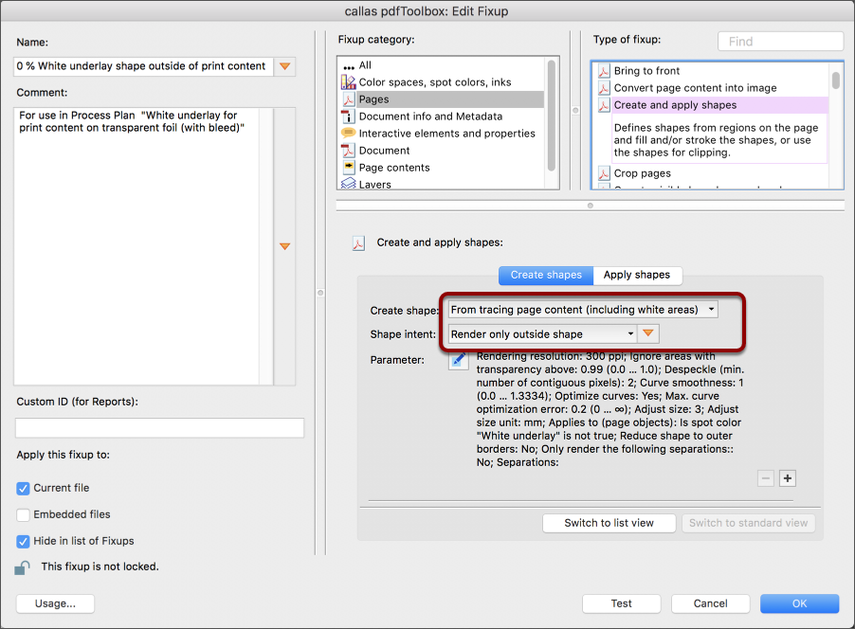 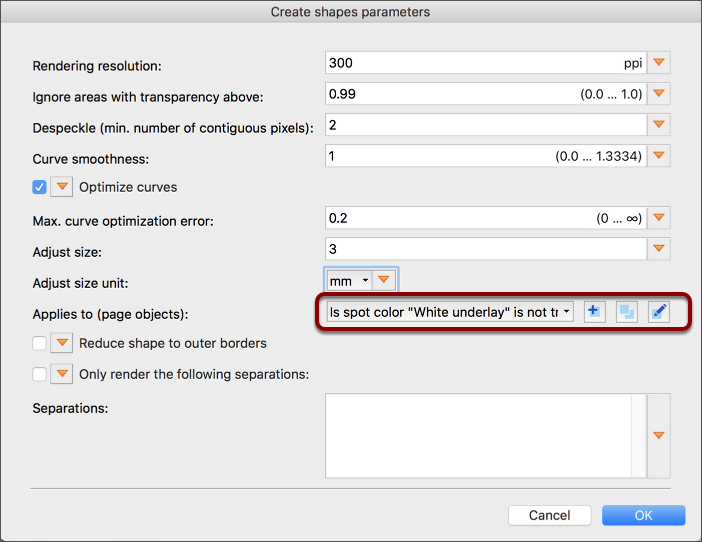 Configure how to fill the shape 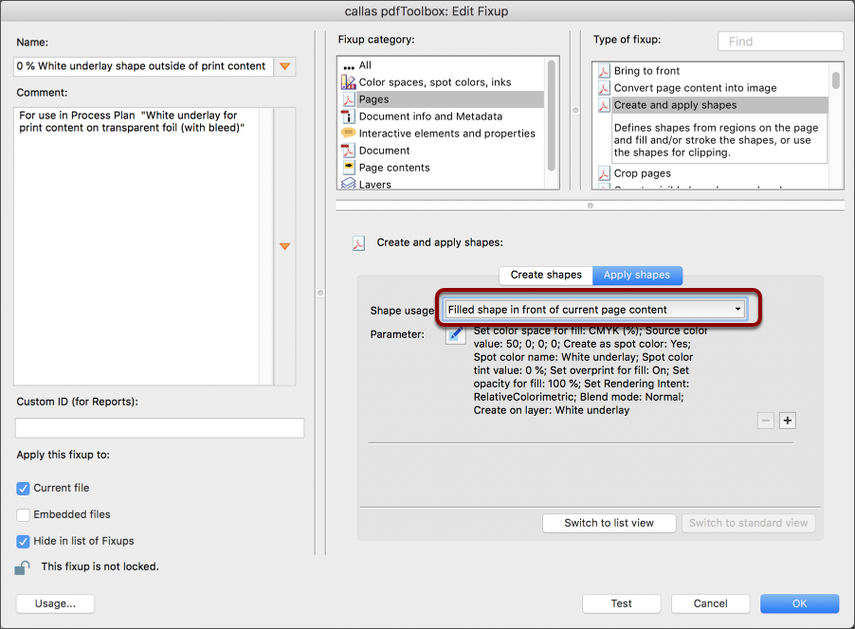 Fill the shape with 0% of "White underlay" spot color 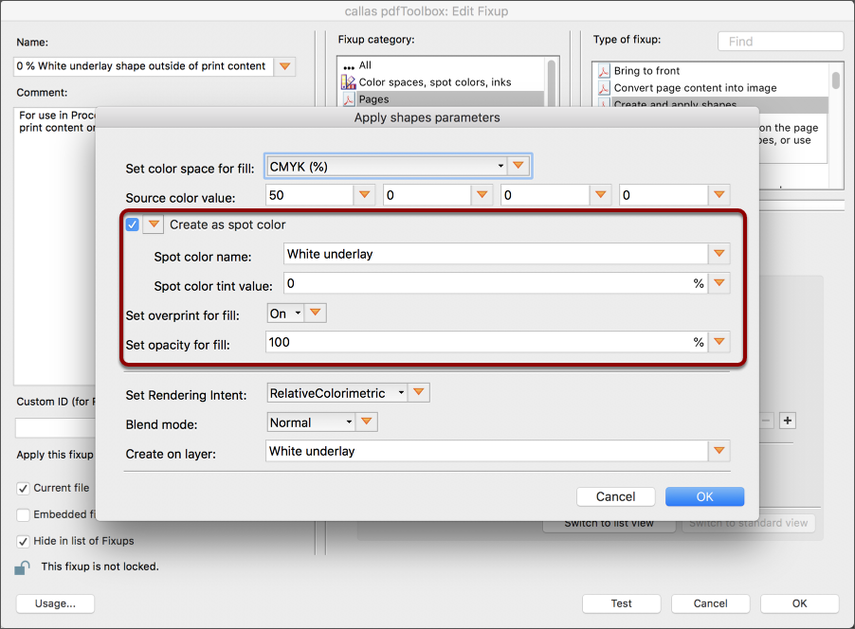 Bring it all together in a Process Plan 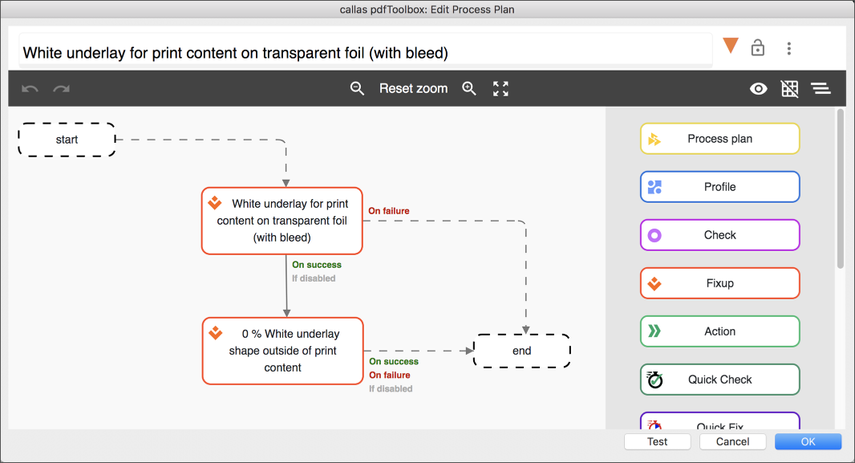 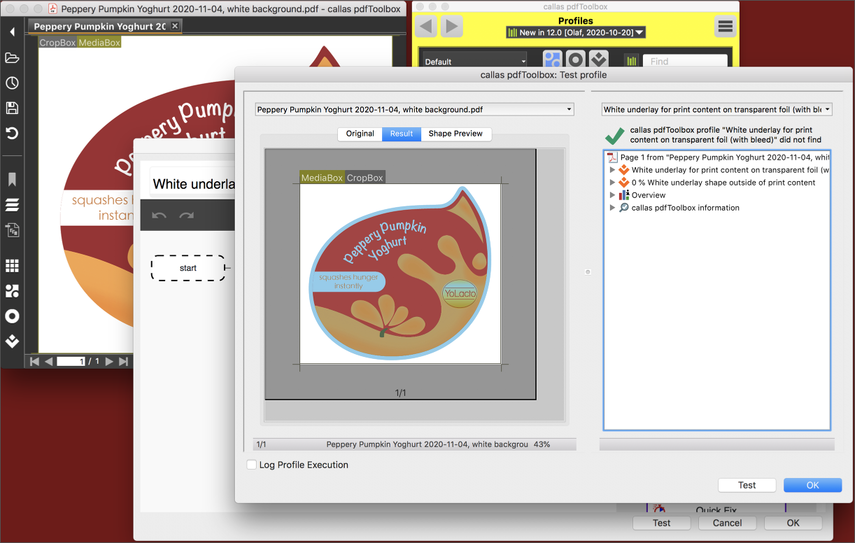