The positioning of HTML elements placed within a document can be influenced in one of two ways:

PDF and HTML files actually use coordinate systems which differ based on the origin points of the X and Y axes.
Whereas PDF uses a coordinate system with the origin on the left, HTML uses a point at the upper left as the origin. pdfToolbox compensates for this difference.

Important: The effective coordinate system for the PDF page as used in the Fixup is defined by setting the reference point to “relative to”. If you also select “Upper left corner” here, both coordinate systems will use the same origin. Positioning will generally only be “intuitive” if this is done.

In all other cases, it is important to be clear about the basic positioning: pdfToolbox first identifies the positioning point on the page using the details within the Fixup.
The reference point for the corresponding corner of the HTML object will be placed on this point. 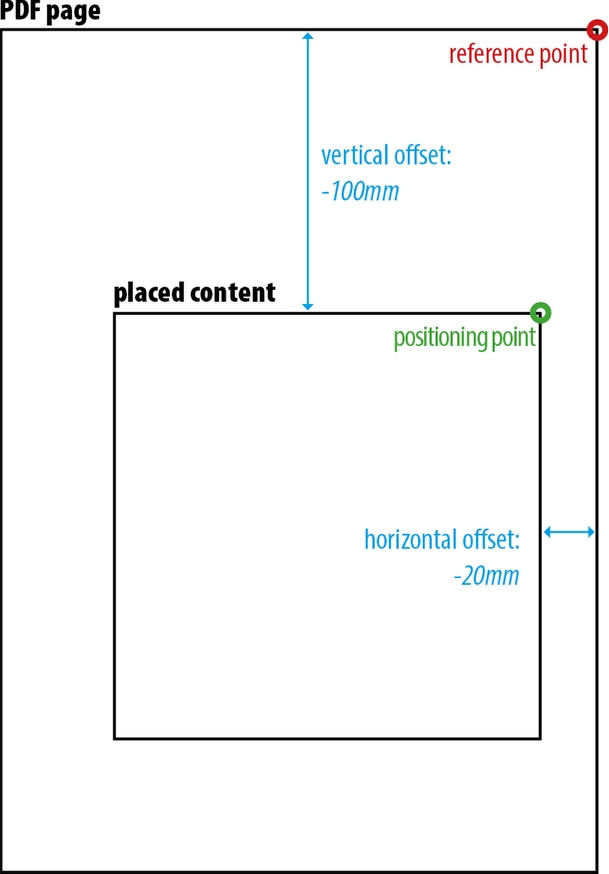 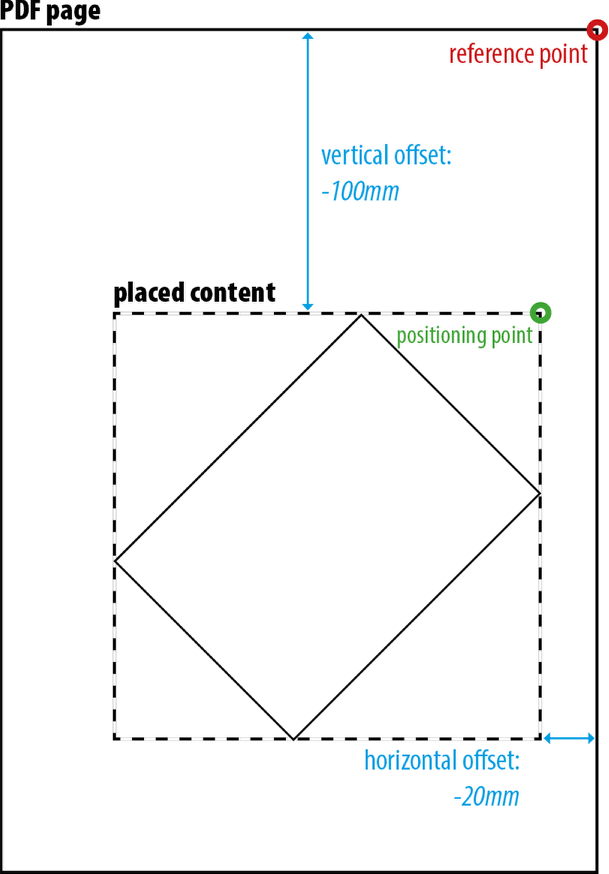 In other words, when the HTML object is placed, the source in the HTML coordinate system is not used. Rather, the corner or edge corresponding to the reference point described in the Fixup is used.
The size of the HTML object therefore plays a particularly decisive role when positioning content.

It is possible to assign a fixed size to the HTML object within the CSS (in the @page rule). This is also advisable if the reference point is not the upper left corner. If this space is left blank, the default size of DIN A4 will be used.

This means that unless otherwise specified, pdfToolbox will place the generated PDF at DIN A4 size within the PDF file to be fixed.

(This can sometimes lead to irritating but logical results if placing a line of text from index.html within a DIN A4 PDF. Certain placing options (bottom left, middle, etc.) which you may want to access using the pdfToolbox dialog will then appear not to work. This is because it is not just the line of text which is being placed, but rather the text within an automatically generated A4 page format.)

Custom page formats for content to be placed must be specified using CSS.

This also means that unless specific provisions are made, an HTML object’s size will never be defined within its own content. A square placed relative to the bottom-left corner can therefore only be placed exactly on this bottom edge if the position of the edge has been calculated in advance and accounted for either in the HTML or in the Fixup’s positioning settings.

It is therefore entirely possible to use a single template to attach different content to each page of a PDF.

As shown above, specifying the desired position for an object defined in HTML can easily get complicated. In many cases it therefore makes sense to create a page in HTML which matches the dimensions of the PDF page. This example, when placed in the header of an HTML file, will produce a DIN A3 “page” in landscape format:

Objects can then be positioned within this HTML page using HTML and especially CSS. This page will then be placed relative to the upper left corner without any offset.